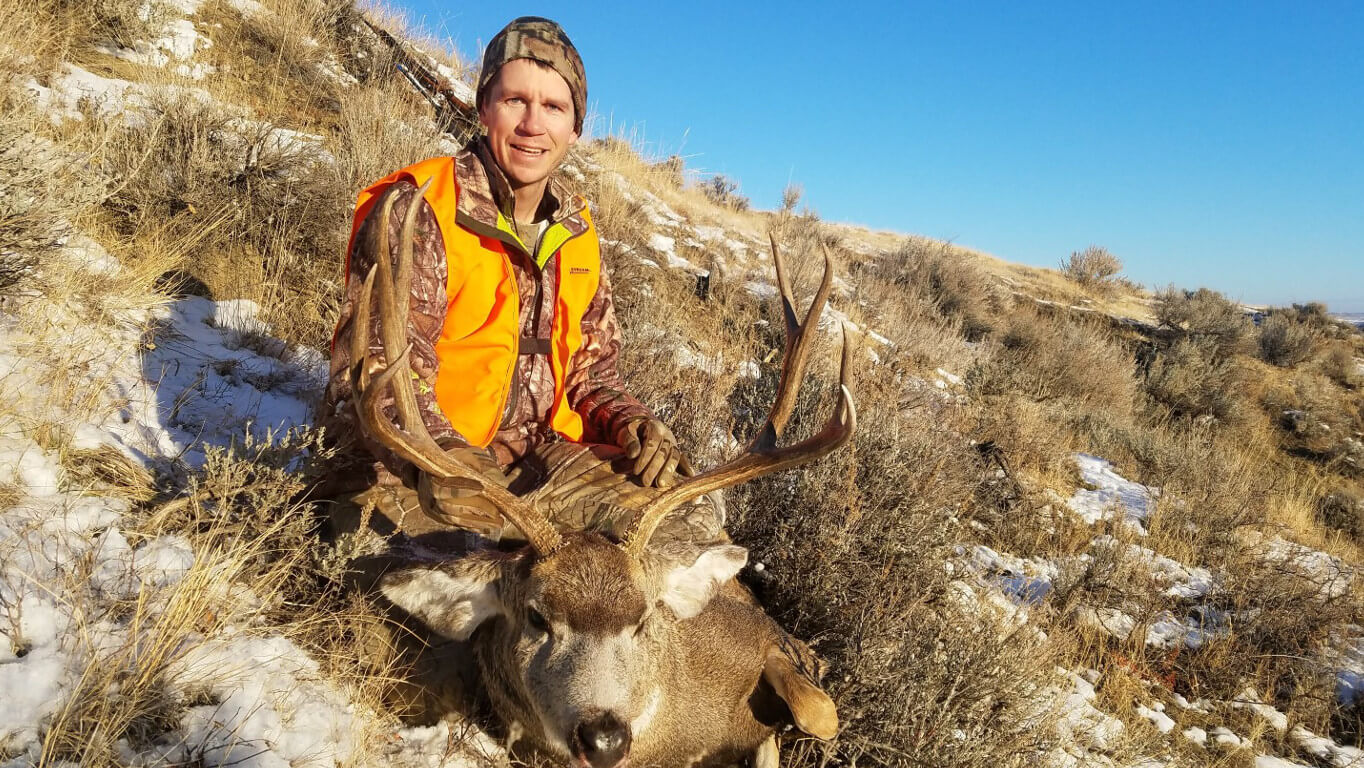 The cold front hit during my drive out to Montana. After hunting last year in 70 degree heat, I was excited to get out into the rugged public lands of Montana in search for an active mature mule deer buck.

Slowly working my way to my friend Mark’s house I stopped to glass a few areas as well as take some pictures.

Snow on the ground, bucks starting to rut, and a mule deer tag in my pocket. I couldn’t wait until morning to get out and start hiking with my rifle on my shoulder.

Mark had drawn a cow elk tag near the Missouri river breaks, so we planned on hunting the rough secluded country in search of elk or possibly a lone Muley hiding in the timber. We started our hike up a long Coulee where Mark had seen a few elk on opening day. After only an hour of hiking and looking up a few side draws we spotted an elk, already bedded down in the timber.

The last elk hunt I had been on with Mark we had spotted a group of elk in the morning and were already packing out meat by noon. This was going through my mind as we were working our way back around the adjacent draw to get close enough for a potential shot. We slowly worked our way up and finally got another glimpse of them. Slowly they moved through the timber, the first one… bull, second… bull. Two more walked by… two more bulls. As amazing as it is to watch these giant bull elk move through the timber we were disappointed that there weren’t any cows with them.

We kept hiking into some very rugged country. Mark spotted a lone bighorn ram standing just below a nearly vertical butte. Soon after, we found a group of a dozen sheep with at least 6 rams.

After hours of hiking and glassing we finally found another single elk bedded in the timber. We crawled up to a peak overlooking them hoping to be within range. Mark loaded a round into his 30-06 and we crawled through the snow up to the top of the ridge. I ranged the trees just above were we had spotted the lone elk. 300 yards. We saw movement and a second elk we didn’t see had spotted us and was moving up and over the next hill. It was a spike, but I ranged him were he stopped in an opening hoping a cow or calf was with them and would follow his path. “350” I told mark as three more elk started moving through the timber towards the opening. “Spikes” he said, while removing the round from his gun.

The next day we hunted a new area down in the breaks, but the wind had picked up from the day before and it made for an extremely cold day. We hiked all morning, but were unable to spot any elk. We found a few mule deer in the afternoon, but nothing worth going after.

Our third day of hunting we decided to switch it up. Instead of heading down deep into the breaks looking for a cow elk, we were going to look for a big mule deer in a new area since we weren’t seeing many mule deer where we had been.

We got down to our new spot before first light and started seeing a few groups of deer, all does and fawns. We kept moving and spotted just the head of a fawn sticking up over the top of a hill. Next to the fawn we could see a little movement. It was just the tips of a buck’s antlers. We could both tell immediately that it was a nice, wide mule deer buck. We were not far from the deer, but the wind was not in our favor and we had to back up and loop way around them to get downwind and within shooting distance. The fawn had been looking right at us so we new the deer could potentially be spooked and run off before we could get into position, so we moved as fast as we could back and downwind of them. We dropped into a coulee leading up to them and made our way closer. We came to a split in the coulee and I spotted three deer running from where we had seen the group of deer. I brought my binoculars up and saw that the middle deer was the big buck we had spotted earlier. I immediately ran over to the draw on the left trying to cut them off. I racked the bolt, putting a 130 grain .270 caliber round in the chamber, cranked my scope from 3 up to 9 power and extended the legs of my bipod all while sprinting up to what looked like a rise I might be able to see the deer from. I spotted the buck through my scope as he was just starting to slow down as the group of deer had reached a hill. I was unable to hold my gun steady with my bipod extended, so I lowered the legs down the prone position and crawled forward. I called back to Mark “How Far?”, he grabbed his range finder while I got the deer back in my crosshairs. “350” he said. I took a few deep breaths and took aim just over the back of the big mule deer buck compensating for bullet drop. The buck looked like he was about to run after a doe that had just disappeared over the next ridge. I slowly pulled the trigger and BOOM…

Whack! I heard the bullet hit and the buck collapsed right were he stood. The longest shot I had taken on a big game animal and what shortly turned out to be the biggest mule deer of my life. 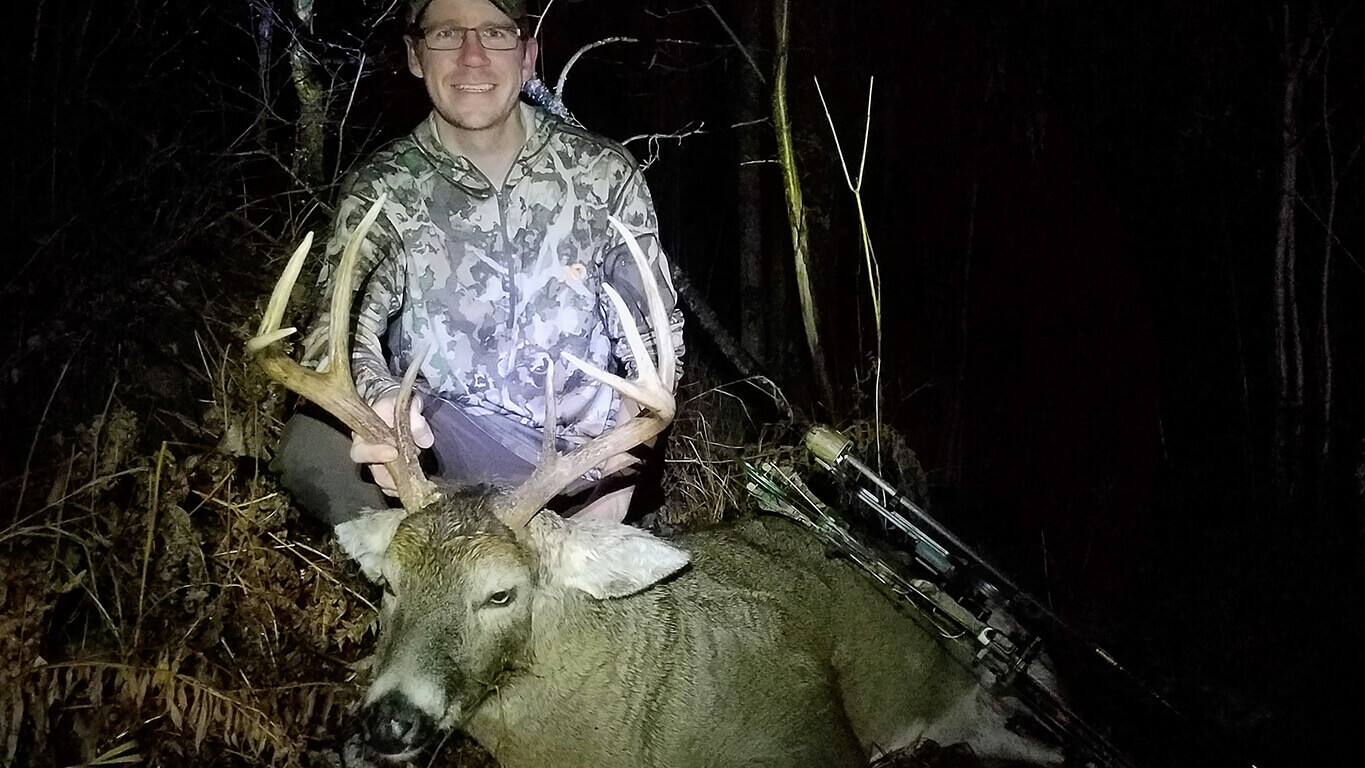 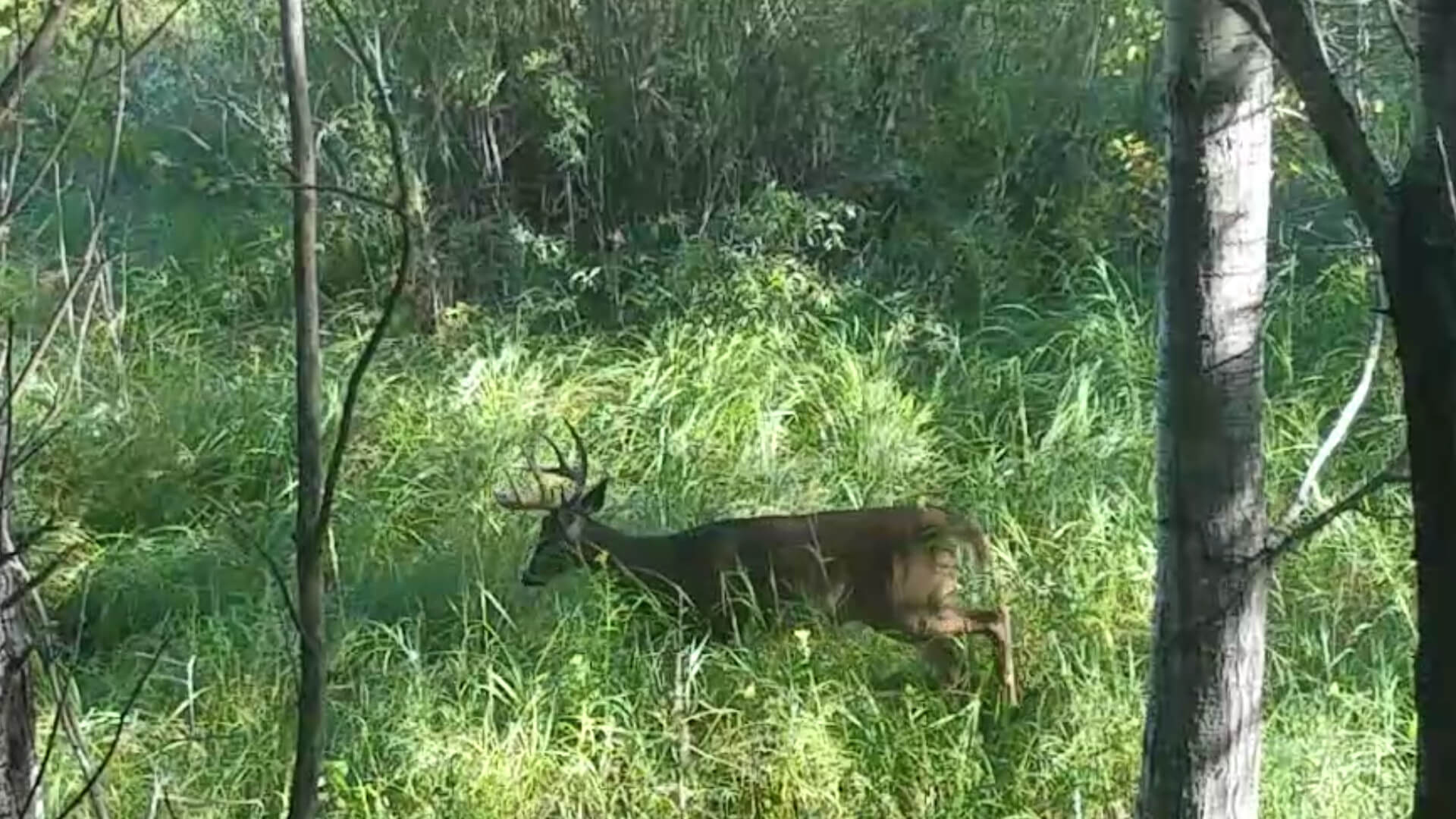 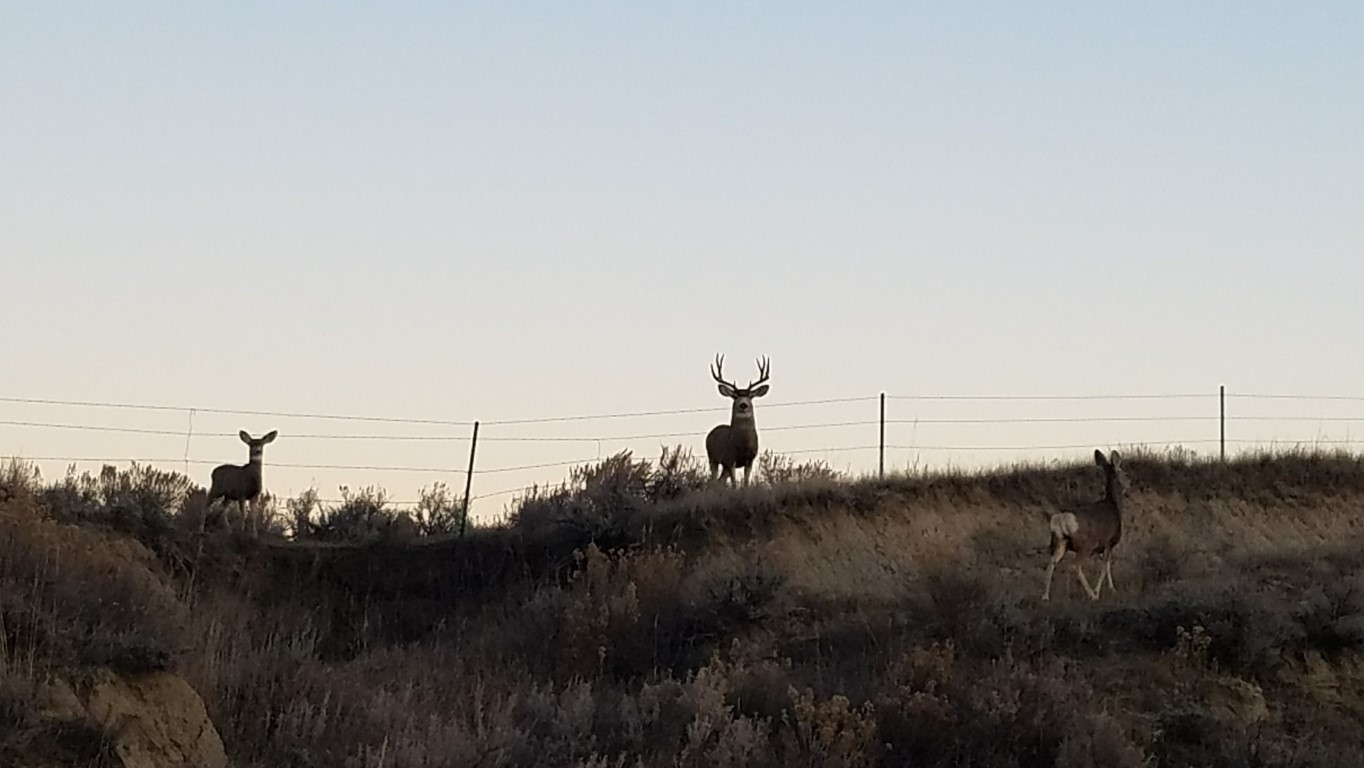